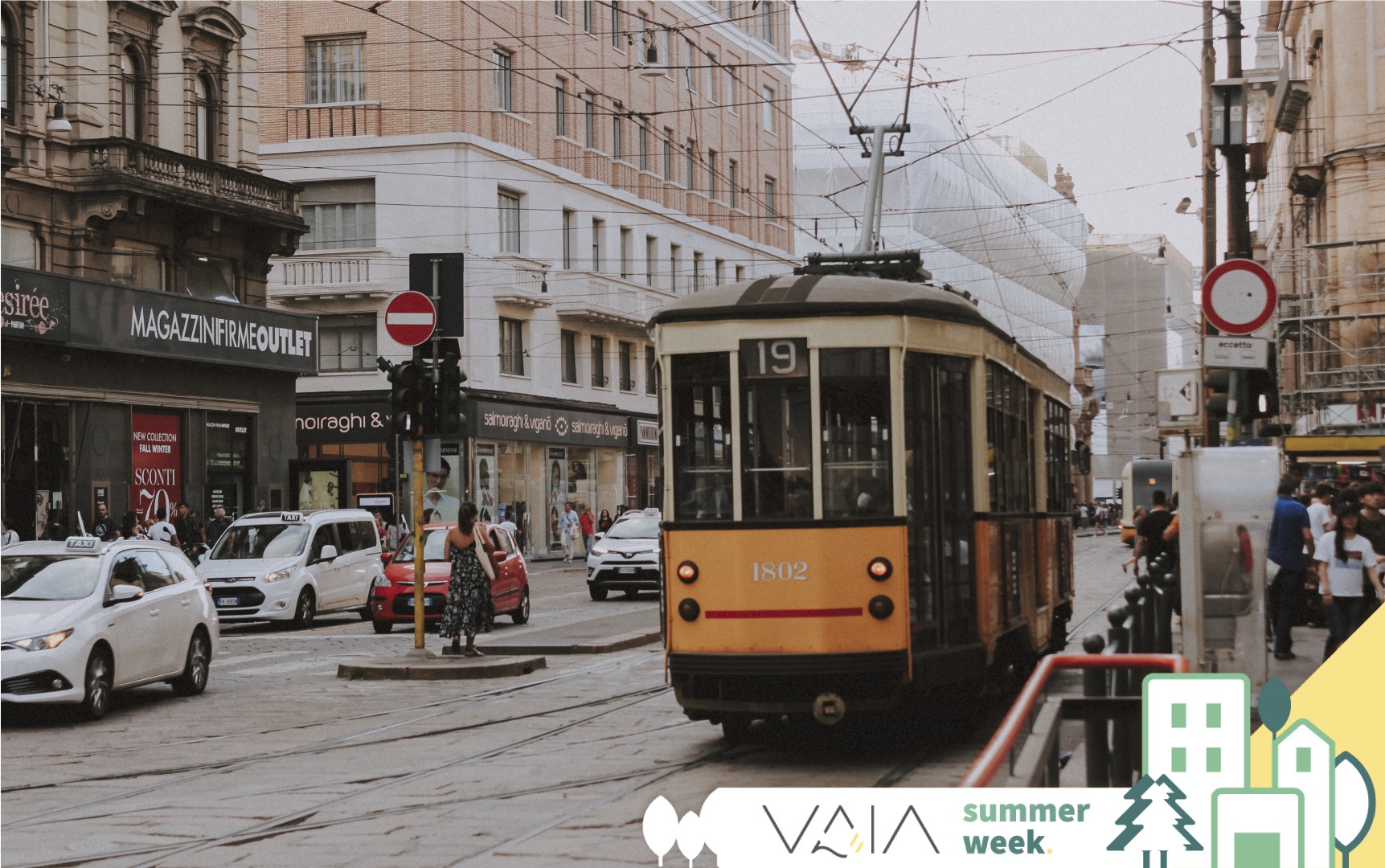 Elisabetta Reyneri is Legal Advisor and Project Coordinator of the non-profit organisation Cittadini per l’Aria (Citizens for Clean Air). On 15 July she will be our guest at “Earth to Milan: trees and communities for the future”, a round table in which we will explore current and future projects for a more sustainable and people-friendly city. We asked her to tell us about the steps that the association has taken in its environmental advocacy action, in Milan and beyond.

Elisabetta, first of all tell is what Cittadini per l’Aria is.

We are an NGO founded in 2015 and based in Milan. Our mission is to guarantee everyone the right to breathe clean air. The European Environment Agency estimated that in 2018, premature deaths attributable to air pollution were over 60,000 in Italy alone: you can see why defending this right is so important! We promote citizen science projects to collect data and raise awareness on air quality issues, and we launch legal actions so that citizens can benefit from a healthy environment. We are also active from a dissemination standpoint, documenting in a detailed and accessible way the scientific evidence on the health harms and benefits of air quality, and promoting more sustainable lifestyles. We act as a national reference point for like-minded associations and committees, and we are also active at the European level  – the problem of air pollution is localised only to a certain extent, and EU bodies have a decisive influence over national environmental regulations. We are part of networks such as the European Environmental Bureau and Transport & Environment, both of which are key to combating air pollution at the European level.

What was the path that led you to Cittadini per l’Aria? Which of your interests came first, environment or law?

I enrolled in a law degree at the University of Turin and over the years my interest in environmental issues grew more and more, in parallel with their increasing relevance in the public debate. This led me to graduate with a degree in environmental law and to do my internship in Milan within a law firm specialised in this field. Then, just over a year ago, I joined the organisation full-time, to work in the interest of civil society and of the environment.

Since 2017, you have been promoting a participatory science project with an emblematic name, recently recognised by the European Environment Agency as a best practice: NO2, No thanks! Tell us about the evolution of the initiative and what it consists of.

With NO2, No thanks! we are carrying out a widespread measurement of nitrogen dioxide (NO2) distribution in some of Italy’s largest cities, thanks to the collaboration of citizens. We entrust citizens with samplers to be placed near their homes, schools and offices, and collect data using a shared methodology. The analysis of the samplers is carried out by a scientific committee of epidemiologists and allows us to draw up beautiful interactive maps, where we graphically show the concentrations of NO2 and the annual mortality rate attributable to exposure in excess of the 20 µg/m3 recommended by the WHO.

Caption: A screenshot of the interactive map of Milan issued by Cittadini per l’Aria (NO2, No thanks!, edition 2020), showing NO2 concentrations and estimated mortality rates. The picture shows the Navigli area. Source: https://www.cittadiniperlaria.org/dati-inquinamento-milano/

Nitrogen dioxide can aggravate respiratory diseases in the short term and facilitates the onset of lung cancer and asthma symptoms. The legal limit in Italy is set at 40 µg/m3, which is twice the value recommended by the WHO – and yet it is often exceeded, especially in the Po Valley. The first data collection campaign on the city of Milan took place in 2017 in response to the so-called “Dieselgate“, as diesel combustion engines are the main source of nitrogen dioxide. The experiment was repeated in 2018 and was extended to Rome and Brescia. In the month following the presentation of the results, Milan Mayor Giuseppe Sala expanded the urban traffic-restricted zone. The 2020 edition also monitored the metropolitan cities of Naples and Caserta.

A national snapshot of air pollution

The problem of atmospheric pollution has recently come under the spotlight following the publication of a new European map, which sees the cities of the Po Valley at the bottom of the list, with average annual PM 2.5 concentration levels well above the recommended threshold. What coordinated actions are you taking at the national level?

One of the reasons we monitor nitrogen dioxide levels is that it is also a good indicator of other traffic pollutants, including particulate matter, black carbon and polycyclic aromatic hydrocarbons. We must remember that Italy has been subjected to numerous infringement procedures by the European Commission for the constant violation of European regulations for certain pollutants, namely PM 10, PM 2.5 and nitrogen dioxide.

Cittadini per l’Aria promotes the NO2, No thanks! project by coordinating and analysing the data, while relying on local organisations for the distribution and collection of the samplers. The experiment was repeated by other associations in several Italian cities, such as Turin, Bologna and Brescia, although an aggregate overview at national level has not yet been drawn up. At the end of May 2021, together with several grassroots local movements, we coordinated a national flash mob by displaying signs that were coloured according to the concentration of nitrogen dioxide detected in front of schools during the monitoring

Among the members of your network we find UpSens, a start-up company dedicated to monitoring indoor pollution with which VAIA has partnered in the past. What is your opinion on electronic devices used by citizens to track air quality?

I think they are very interesting tools. I always have a look at apps like AirVisual or Wiseair, which tap into a distributed network of air quality sensors, before leaving my house in the morning.

Bringing the forest to the city

One of the objectives of urban reforestation initiatives is to absorb air pollution. Are these measures effective? What is your proposal for Milan?

The planting and greening projects we are hearing more and more about are extremely useful: trees mitigate the heat island effect, absorb pollutants and ensure greater liveability, allowing citizens to find greenery and cleaner air even within the urban perimeter. However, the association aims not only to green our cities, but also to reduce emissions directly at their source. There is a real risk that reforestation campaigns will become an exercise in greenwashing – I have a mother who is a botanist and she always reminds me that it’s not enough to plant a tree but you have to accompany its growth, and not all species are good in all areas [VAIA talked about this problem here].

Per Milano guardiamo all’esempio di grandi città come Parigi, Bruxelles e Londra. Sosteniamo la For Milan, we look at the example of big cities like Paris, Brussels and London. We support pedestrianisation and active and integrated mobility, and we aim to make Milan a City 30, that is an urban centre with a 30 km/h speed limit. In the midst of the Covid period we wrote and circulated an appeal for urban environmental regeneration, explaining the recovery we would have liked and still want, so that our cities do not return to pre-pandemic normality. One example above all: the first 2020 lockdown reduced Italian NO2 levels by an average of 45%. We are fighting for active mobility and for a people-friendly city – measures that require freeing up large portions of urban space currently dedicated to private vehicles.

You are also part of the organising team of LCOY Italy (Local Conference of Youth), the national conference on climate change organised by young activists. How are you preparing for COP26 in Glasgow? Which topics have you decided to focus on?

PUnfortunately I can’t tell you anything yet, we will publish the chosen themes very soon. All I can say is that the conference will be held at the end of September, it is open to all interested young people and it will deal with very topical issues that are very important for the younger generations. The 2020 LCOY, for example, was entitled “Climate and health: challenges for tomorrow’s cities”.

The objective of LCOY 2021 is really important because we will formulate proposals that will be collected by the official youth representation at the United Nations (YOUNGO) and included in the negotiation process of the United Nations Climate Change Conference 2021, known as COP26. As in 2020, the next edition of LCOY will be organised remotely to facilitate the participation of young people from all over Italy. The COP will be preceded at the end of September by a preparatory meeting (Pre-COP), which will be hosted in Milan. Young people will also play a major role through the Youth4Climate event, with 400 boys and girls aged between 18 and 29 from 197 countries!

I am dedicating most of my free time to the preparation of LCOY 2021, but it is time well spent because working with so many young people who are committed to making a concrete change increases my confidence in a better future.