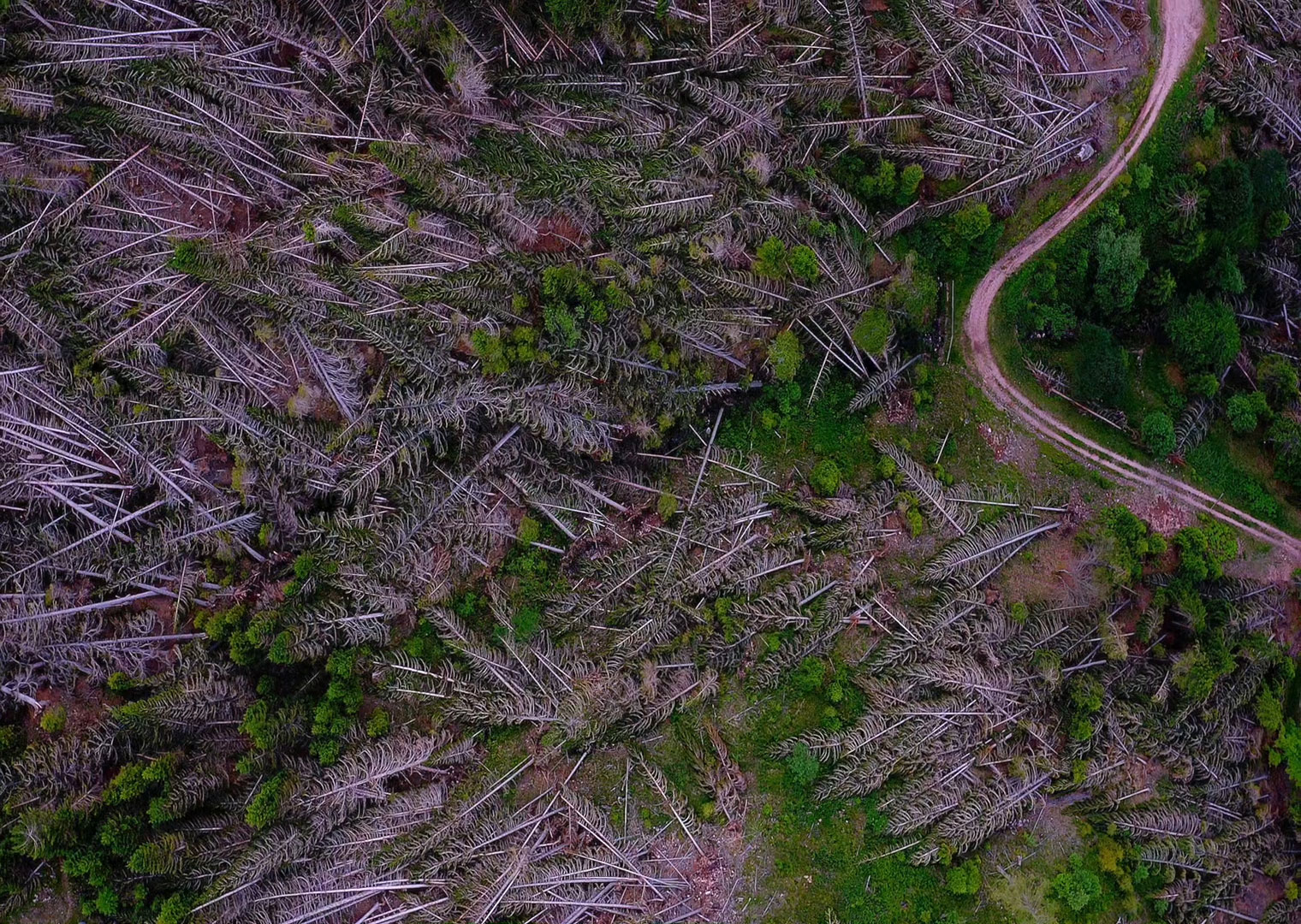 Paolo Kovatsch is the technical manager of the Provincial Forestry Agency of the Autonomous Province of Trento, and leads the recovery and restoration actions of the local public woods affected in 2018 by the storm Vaia. We have interviewed him to take stock of the situation on the territory, two years after the event.

In 1966 Trentino was hit by weather phenomena comparable to those of Vaia in 2018. In a beautiful video shot in Cadino, near the Manghen pass, you highlight a surprising overlap between the 1966 and 2018 uprootings.

Does this fact tell us something about forestry planning? Is this overlap due to the specific conformation of the territory, or is it rather due to a failure in forest management to learn from past disasters?

We are not sure about this. Data suggest that the Cadino area has an exposure and a morphological conformation that in rare cases favours the exceptional type of uprootings that we have witnessed, both in 2018 and in 1966. The physical effect of the wind was the same: a strong sirocco, coming from the Manghen Pass, from the south-east.

With regard to the second hypothesis, namely that the structure and management of the forest may have influenced the response to the physical event now as it did then, it should be noted that the two events took place in diametrically opposed situations. In 1966, thanks to the precious testimony of the very first ten-year management plan, which was tested a few months earlier, we know that the forest was mature and articulated, with a good variety in the distribution of stem diameters. In 2018 – almost necessarily, given that barely fifty years had passed since the last crash, the forest was more homogeneous and younger. This might prove, to some extent, that having two different woods doesn’t count for much when it comes to coping with 200 km/h winds, as on the occasion of Vaia.

The planting strategies of the 1950s and 1960s depended largely on commercial variables: the value of timber was much higher than today, and spruce was the most profitable forest species.

Apart from a purely economic argument, however, it should be borne in mind that in the Cadino area the altitude of 1500-1600 metres severely limits the variety of tree species. The most affected areas were mostly covered by spruce (Picea abies), which is characterised by a shallow root system. Plants such as silver fir and larch broke off at a certain height, but this did not change much. The extraordinary strength of the wind did not leave much room for the composition of the forest.

The biggest problem lies in the expansion of spruce at lower altitudes, such as 400-500 metres. In that case, planting a species outside of its natural habitat exposes it more to disease and fungal attacks, effectively reducing the forest’s health.

The strength of the larch

The larch has a particularly deep root system. By increasing its proportion, given its characteristics, can we strengthen the forest?

Today, replanting activities are much more oriented towards forest management that benefits natural regeneration. Consequently, action will not be taken on all the hit areas, not least because of the costs involved, given the scale of the damage. Interventions will be concentrated where the active protection provided by the forest is most in need, that is where we miss its soil stabilisation function.

The composition of the replanting will take account of this approach, and the larch is certainly a valuable plant – a pioneer species that can quickly colonise open spaces due to its hunger for light. The larch will be planted alongside spruce and other appropriate species, depending on the area of intervention, but it cannot be used in all situations, as it grows preferably at certain altitudes and microclimatic conditions.

Saving what we can

As you told us recently, retrieving felled logs remains your priority, and currently stands at 70% of the total. What does this focus depend upon – environmental, logistical or economic reasons?

The need to recover material is mainly aimed at limiting the loss of uprooted timber: while in some areas the damage was 5-6% of the total stock, in other areas of Trentino (and elsewhere) it reached peaks of 90%. A fast and as complete recovery as possible answers to the need of “cashing in”, so as not to waste timber that still has a good commercial value.

It should be borne in mind that what appear to us as natural disasters are often part of cycles that are essential for natural regeneration. Given our human needs though, it is understandable to speed up habitat recovery as much as possible.

Abundant uprootings constitute an accumulation of wood that becomes necromass and takes decades to be disposed of by the ecosystem on its own. In a study on the effects of Hurricane Viviane, which struck Switzerland in 1990, the methods of land restoration were diversified (total salvage, partial salvage, no salvage) and their evolution monitored. On state-owned property, the same procedure will be implemented in collaboration with the University of Turin, by monitoring vegetation development in different situations. Leaving all the material on the ground leads in particular to the risk of infestation, e.g. of the bark beetle, which expanded strongly during 2020 thanks to favourable weather conditions.

As far as logistics are concerned, a great deal of work has already been done to open up new forest access routes, while the path network has been restored for the most part already during the last summer season.

The post-Vaia era: maintaining the topsoil

One of the most urgent post-Vaia measures is to stabilise the topsoil. In view of the frequent landslides that occur on the Italian peninsula, and which will continue to increase in frequency and intensity according to the latest CMCC report, which areas are most in need of restoration? What strategy is the Autonomous Province of Trento following?

The Provincial Forestry Agency, in collaboration with the Civil Protection Department and other local Services, has defined a map of priority interventions by cross-referencing data on exposed slopes affecting the most vulnerable areas. We have paid particular attention to slopes close to inhabited areas or roads, to basins where Vaia has almost completely destroyed the topsoil, thus exposing the steepest areas to landslide risk, and to avalanche zones.

How long do we have to wait to achieve a renewed hydrogeological resilience, compared to the pre-Vaia period?

The difference will clearly depend on the areas of intervention. Areas with continental climatic characteristics such as Paneveggio, characterised by a harsher climate, require much more time for complete restoration – just think that in a 50-year period the plants can grow just 2 metres, compared to 8-10 metres in milder climates. Fortunately, these areas are a proportionally small part of the total damaged areas and are mostly located in areas of lower risk to humans. Sites with a higher priority for hydrogeological risk, or those located in areas more favourable to restoration, will follow a different development.

Overall, the affected areas will still be recognisable for at least the next thirty years. As far as effective resilience is concerned, we must remember that bare ground immediately begins to cover itself with grass and various shrubs. Recovery will therefore be faster, estimated at 5-10 years over the whole territory – except for the risk areas mentioned above, where it will be accelerated by planned artificial planting.

How do you assess the contribution of private actors such as VAIA to the restoration of an area which, for the most part, is publicly owned? Some say that action should fall exclusively under the responsibility of the public sector.

Your initiative, like so many others, is aimed at tapping into a sensitivity that is shared by everyone. The example of Trentino Tree Agreement is relevant in this sense, since it is a public initiative that raises private funds. We must try to preserve this vision. VAIA has the additional merit of focusing on the valorisation and reuse of timber.

It is significant that after two years we are still talking about the storm – with the bombardment of information that we continue to receive, I frankly didn’t expect this. The real work begins now, so keeping to inform the public on the issue is paramount.

More concretely, it should not be forgotten that the financial support offered by the private sector makes it possible to rebuild a stable and liveable territory, to the benefit of all. This is particularly important in light of the scarce resources available to public administrations, due to the reduction in the value of wood. The north-eastern sector of the Alps bears the fruits of continuous land maintenance.

In a nutshell, it does not matter whether the intervention is public or private. What matters is that the results benefit us all.

An opportunity to sequester new carbon

How is the Provincial Forestry Service trying to increase the forest’s potential as a carbon sink?

The silvicultural techniques developed in recent decades, which fall since the 1980s under the name of “naturalistic silviculture”, have as objective the management of the forest as a whole, limiting artificial interventions to a minimum. The Magnifica Comunità di Fiemme is certified with both the PEFC and FSC protocols, while the provincial forests and about 80% of the municipal properties of the province are PEFC certified, testifying to the eco-sustainable management of the territory. The overall objective is to increase the forest’s biodiversity and articulation in order to increase its resilience, while favouring and triggering natural renewal processes of the topsoil.

The rejuvenation of certain wooded areas is undoubtedly a technique to increase their carbon storage function, but this requires following decades-long rhythms. For example, the restocking of forests after the end of the Second World War made it possible to reach current levels by reducing timber harvests over several decades – a situation which today allows us to cut around 70% of the total annual increment, maintaining the long-term sustainability of the forest stock.

Young forests are therefore more effective from a CO2 sequestration point of view, but it is not the only objective that management can set itself. On the other hand, it is only through proper forest management that it is possible to achieve significant CO2 sequestration. Construction projects such as Wood Way, carried out by Ri-Legno with the wood felled by Vaia, is an excellent example of how sequestered carbon dioxide can be part of a valuable cycle of emissions reduction.