One year after storm Vaia 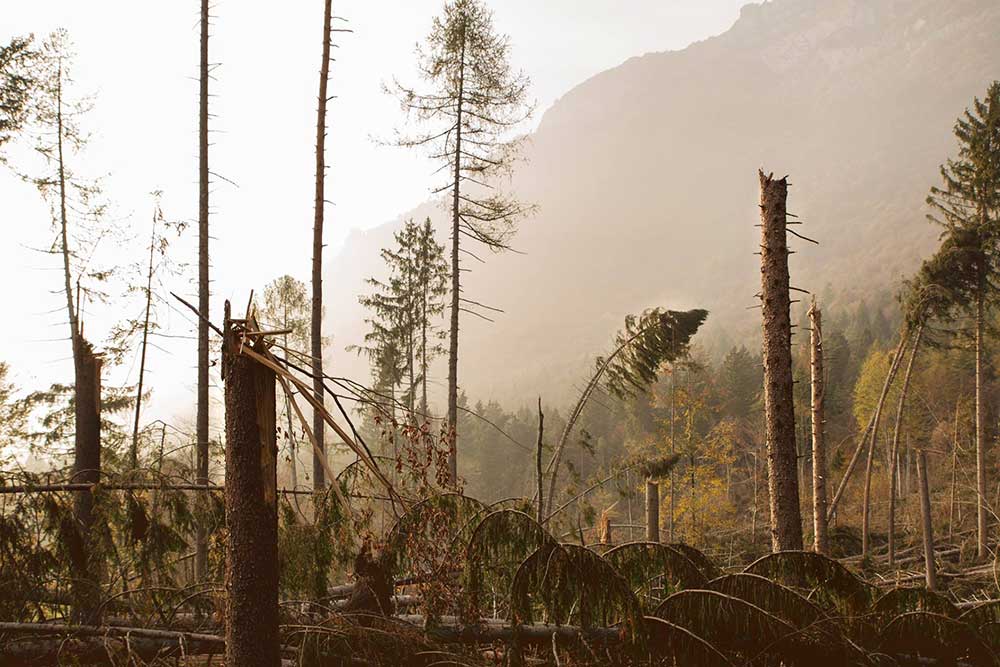 During the night of 28 October 2018, winds from the Atlantic Ocean clash with sirocco, giving rise to a rare low pressure area.

The storm named “Vaia” hits Northern Italy, raging in the Alps of Trentino and Triveneto, in the Prealps, and to a lower extent in Eastern Lombardia. The Sisef (Italian Society of Forestry and Forest Ecology) has defined it as “an unprecedented phenomenon in the last 50 years at least”. Its advent tears apart the Alpine ecosystem: 437 affected municipalities, over 41.491 hectares of forest area, with a total of 8,7 million cubic meters of downed trees.

Winds have blown as strong as at 200 km/h, and only here have rainfalls reached 800 cm, exceeding the levels of the 1966 flood.

The low pressure area can be seen as encompassed in the general October-November 2018 Italian windstorm season. It has been estimated to have caused damages for almost 3 billion euros (2.809.400.000).

A phenomenon of unprecedented magnitude for Italy, which marks a scar in the history of our territory.

The other side of climatic changes

A year has already passed since the storm struck, and yet it is still difficult to take stock of the actual losses caused by this mediterranean tornado.

The parts of the forest that constituted the greatest danger have now been restored and the most significant damages to the infrastructure have been contained.

Nevertheless, about 40% of downed trees is still awaiting recovery. A prolonged wait threatens to devalue the price of a cubic meter even further, after it had already shrank to a tenth of the average market price right after the calamity.

Not to count the economic costs for local communities. The hit forests, in fact, will take several decades, if not centuries, to recover their original shape.

Time lapse of the event:

Vaia what is next? Climate change is a challenge we have to face

Vaia is nothing other than a manifestation of underway climatic changes, which will spread at a faster pace. While facing this fact and devastated alpine environments, it is easy to feel discouraged and to give in to grief.

Yet, it is possible to embrace resilience and to learn the lesson from such events, with the aim of framing prevention and environmental protection plans.

The catastrophe can be turned into new opportunities for social, environmental and economic growth.

Hit areas have immediately shown great resilience by adopting cooperative measures and innovative plans to recover from the cyclone.

In the months following the storm, for example, Pefc launches the “Solidarity chain” for the benefit of damaged territories.

These include the collection and of large fallen conifers’ tips, sold as Christmas trees or for the planting of new trees.

The creation of a fair and certified supply chain allows to streamline and speed up the extraction of lumber that would otherwise be lost, minimizing losses for the owners and ensuring greater safety for loggers.

The passage of Vaia cannot be considered a chance event: it is a message, a sign of suffering to raise collective awareness.

A warning that can serve to reconsider our relationship with the environment.

We need to implement a change that moves from an exploitation perspective to one of synergy and return of resources.

We just have to listen to this call and follow the wind of change, towards a more sustainable world.

Curiosity: why the name “Vaia”

You might have noticed that atmospheric phenomena are given a name, as if we wanted to impart them an identity. Looking for how and why this tradition has begun uncovers a fascinating story.

Although they may seem serendipitous, names are actually chosen by following a “reservation list”, to which the public can have access by purchasing their own spot. Following this procedure, names are distributed in alphabetical order and progressively assigned to each event, starting anew from the first letter.

In Europe, the Meteorological Institute of the Freie Universität of Berlin traditionally determines the names of atmospheric events.

Those are divided in cyclones (lows) and anticyclones (highs). The price for a low is 299 euros, while a high prices for 199 euros.

The procedure was born as an innovative fundraising solution to fund the scientific activity of the Research Department, after budget cuts took place in 2002 (which drastically reduced resources required to maintain a sustainable and effective research).

The cyclone was named after Vaia Jakobs, a manager for a multinational group based in Dusseldorf. Her brother wanted to surprise her with this original present.

This site uses cookies in order to offer our customers a better experience. Cookies information are stored in your browser and memorise some functions, for example, remembering you’ve entered the site and helping us to understand which sections of the web page are the most interesting and useful for our visitors.
Strictly necessary cookies Always Enabled

SAVE & ACCEPT
Powered by